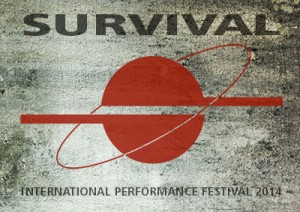 SURVIVAL follows CUT, HUNGER, and ESCAPE as the theme of the International Performance Art Festival, which is taking place from August 29 to September 6, 2014, For the fourth time, the festival, a co-production by Open Space Berlin and the BLO-Ateliers,provides a platform for over 60 Berlin and international artists and for what constitutes performance art: spontaneous creativity, confrontation, experiments, in short: artists in real time. With its unique combination of workshops, the Performance Lab, and interventions in the public space, the festival presents a cross-section of the current positions of artists from Berlin, Asia, Europe, and North and South America, and their enormous diversity. Radical performers, political actions, and poetic, mystical, and symbolic performances provide richly contrasting insights into the nomadic nature of contemporary performance practice. Why SURVIVAL? How to survive – as an artist, as a cultural institution, while fleeing persecution, after natural catastrophes, in war, while confronted with the flood of data and information, in the transparent world . – is one of the biggest questions that we face today. At this historic moment, when there are growing fears about our continuing existence, a mistrust of political structures and social networks, and concerns about our environment, there are nonetheless, or perhaps specifically as a result, also more and more confirmations of the power of people’s innovative creativity. New ideas are formulated, realized through personal initiative, and alternative forms of survival are developed. The theme this year once again serves as a blueprint and source of inspiration for the artist presenting their works during the Festival. The two main festival locations – BLO-Ateliers and Tempelhofer Feld – were deliberately selected since their survival as alternative, self-organized spaces in spite of gentrification continues to be at Risk. In 2014, SURVIVAL is a theme that directly impacts the BLO-Ateliers. This year, the studio community in Lichtenberg is caught up in complicated negotiations with the Deutsche Bahn AG regarding extending the lease. At the same time, 2014 also marks the 10-year anniversary of BLO-Ateliers on the site, which is already in itself reason enough to celebrate its survival.  Since being defined by the referendum on May 25 as an enduring, open urban space, the former airfield offers an ideal stage for performative action. Opening Performances: Saturday, August 29, Supamolly 8 pm – midnight – Performances Midnight – open end – Opening Party Interventions in Public Spaces: Sunday, August 31, Brandenburg Gate Wednesday, September 3, Tempelhofer Feld Thursday, September 4, Gallery Soma Performance Finale: Friday, September 5, BLO-Ateliers 7 pm – midnight – performances Saturday September 6, BLO-Ateliers 4 pm – 11 pm – Performances 11 pm – open end – Closing Party Workshop: August 29 – 31, BLO-Ateliers Workshop for artists and other interested individuals under the direction of Andre Galeano. Performance Lab: September 1 and 2, BLO-Ateliers Thematic and interdisciplinary research with an open end for artists in the festival and all interested individuals. The results will be presented during the intervention on Tempelhofer Feld on September 3 and the finale at BLO Ateliers on September 6 and 7. Venue 1: Supamolly Venue 2: Theaterhaus Mitte Venue 3: Brandenburger Tor Venue 4: Tempelhofer Feld Venue 5: Gallery Soma Venue 6: BLO-Ateliers Addresses of the Event Locations: Supamolly, Jessner Strasse 41, 10247 Berlin Friedrichshain, (supamolly.de) Theaterhaus Mitte, Wallstrasse 32, 10179 Berlin, (thbm.foerderband.org) Galerie Soma, Liegnitzer Strasse 34, 1099 Berlin BLO-Ateliers, Lockkunst e.V., Kaskelstrasse 55, 10317 Berlin, (blo-ateliers.de) Organizers: SURVIVAL is a collaborative project of Open Space Berlin and the BLO-Ateliers. Two groups that are able to look back on many years of performance festival experience, join forces to strike out on new paths and have new experiences. Open Space Berlin is an internationally networked platform for artists from the fields of performance art, theater, and visual art. Outside of the mainstream, Open Space organized festivals, performances, interventions in public spaces, workshops, and labs (openspace32.de). The BLO-Ateliers are one of the most multifaceted and largest studio communities in East Berlin. In the now ten-year-long existence on the former railway depot, the artists have created a lively location for art and culture in Lichtenberg. The canteen event location and the attractive outdoor areas are the showplace for performance art festivals, numerous exhibitions, music, and theater events.